Heather Park is a trail that gains almost 4,000 feet in elevation while giving you magnificent views of mountains, forest and sea for its entire length. Those benefits usually mean a difficult climb; unless you can drive up to top and hike the trail in reverse!

Because the Hurricane Ridge Road was constructed to give sightseers above tree-line access to Olympic National Park, hikers can drive to trailheads that are a mile high in elevation. While just negotiating the winding road from the main entrance up to the Hurricane Ridge Visitor’s Center is journey enough for some, for others the road means you can enjoy hiking the ten-mile trail from the Hurricane Ridge parking lot down to the Heart O’ Hills campground far below. To take advantage of this unique situation – and not have to hike back up the mountain – you need a friend with a second car and a good guidebook. In my case, I not only had the guidebook, but because I was the high bidder at last year’s Washington’s National Park Fund auction, I had its author, Craig Romano for the day!

Craig is a prolific writer, tireless outdoor enthusiast and dedicated conservationist here in the Pacific Northwest. Though Craig had hiked this path many times before, documenting the trail for his book Day Hiking the Olympic Peninsula, he seemed as genuinely excited about the day ahead of us as I was. Our weather was perfect, tee-shirt temperatures and a cloudless sky, but don’t let the weather down in Port Angeles fool you. Rain at the park entrance can turn to snow at the top of Mt Angeles; conversely, there are days when sunny Hurricane Ridge looks down on thick clouds and fog below. Always bring extra waterproof clothing!

Our plan was to hike the Sunrise Ridge Trail from the parking lot to Mt. Angeles and from there the Heather Park Trail down the hill. Right from the beginning the views were incredible. The trail snaked along the spine of the Sunrise Ridge; where on one side, facing the interior of the Park stood the snow and ice capped Baily Range, while on the other side, far below, lay the bright blue of the Straits of Juan de Fuca.

I love Craig’s day hiking books. Craig writes concisely and with each trail report he gives an elevation chart, ratings, and options on extending the hike. Craig rated the Heather Park trail 4 out of 5 stars for overall appeal. Craig’s elevation chart showed a 3,800 foot change in elevation and 4 out of 5 for difficulty – good justification for hiking downhill!

The interior of Olympic National Park

The sun beat down on us and the trail was dusty-dry. There isn’t any water for most of the day so bring plenty with you. At three miles into the hike, we began climbing up the shoulder of Mt. Angeles. Mt. Angeles is massive, a six-mile long, U-shaped mountain with multiple peaks. The cliffs above us were bands of sedimentary rock that had been violently heaved about until they stood on edge. The trail climbed steeply up to 5,800 feet, the highest elevation of the day. Here we stood at the barren junction of three trails: the Sunrise Ridge trail, on which we were hiking, the Klahhane Ridge Trail to the east, and the start of the Heather Park trail below us. Back in 1885 Lt. Joseph P. O’Neal, another one of my Olympic Peninsula heroes, named this place Victor Pass, after Victor Smith, a Port Angeles business leader.

Lt. Joseph P. O’Neal led a military mission that was the first organized expedition into the then unknown Olympic Mountains. While it was an easy drive for us to the Hurricane Ridge parking lot and a few hours hike to get where we stood, it took O’Neal and his solders a month to hack their way from Port Angeles to Victor Pass. O’Neal wrote, “Often we would come to a windfall 20 to 30 feet high, which seemed to have been the result of winds of hundreds of years.” I said to Craig that it was difficult to imagine a primeval forest like that.

Craig and I continued down the trail, swapping stories about climbing in the White Mountains of New Hampshire where, coincidentally, we were both raised. We hiked past Thumb Rock and blobs of pillow basalts. Lt. O’Neal standing on the same spot 128 years ago wrote, “There is a curious rock about the center of the valley which at a distance resembles a haystack. The peaks around show strange, fantastic figures. The place could well be called the mountain of the Gods.”

Craig and I continued along Mt. Angeles to Second Top where you could see the Dungeness Spit and Mt. Baker far in the distance. We hiked through Heather Park, a lovely wooded glen and took one more break at First Top, savoring the last spectacular view before leaving the mountain and hiking down to the Heart O’ The Hills campground where Craig’s car was parked.

And what happened to Lt. O’Neal’s 1885 expedition? They continued struggling with their mule-trail along Hurricane Ridge, through Grand Valley to the headwaters of the Dungeness River at Cameron Creek. O’Neal scouted further ahead, all the way to Mt. Anderson. But new military orders ended his exploration. On August 26th O’Neal left the Olympics for Fort Leavenworth without achieving his goal of a road through the interior of the Olympics. When summarizing the Olympic Mountains O’Neal wrote, “The day will come when the State of Washington will glory in their wealth and beauty.”

To reach the trailhead from the Holiday Inn Express and Conference Center in Sequim :

We start at the top

The strait is far below

The interior of Olympic National Park

Down toward Heather Park

Careful down the slope 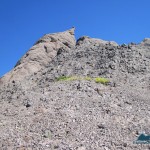 Remains of a cabin